View our Bioavailable minerals and their relationship to human health poster. Click Here. 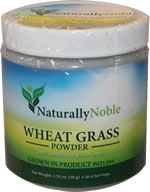 Our Wheatgrass powder is grown from our lab-tested soil conditioner made from minerals, which increases uptake in the plants. These mineral deficiencies may be associated with a weakened immune system: Boron, Iodine, Magnesium, Silver, Zinc, and Tin.

Our Wheatgrass powder is grown from our lab-tested soil conditioner made from minerals needed to increase uptake in plants.

If you have, or are at risk for a weakened immune systems you may have a deficiency in any of the following minerals: Boron, Iodine, Magnesium, Silver, Zinc, and Tin.

Mix 1 tsp with 1/4 cup water, juice, or smoothie, one to three times per day.

Our Wheatgrass powder is grown from our lab-tested soil conditioner made from minerals needed to increase mineral uptake in plants. 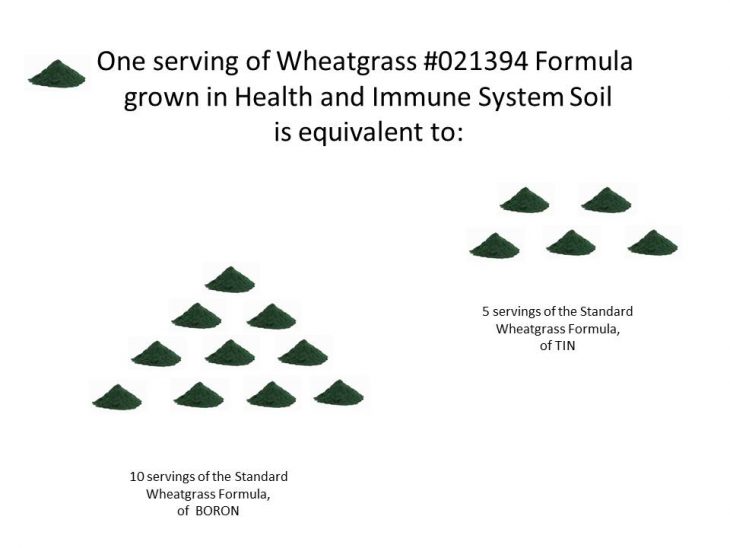 Boron appears to affect calcium and magnesium metabolism and membrane function. It is essential for efficient absorbtion of calcium in the body and was found by the U.S. Department of Agriculture to significantly reduce the loss of calcium, magnesium and phosphorus in post-menopausal women. It may also be helpful for ischemic heart disease and other forms of cardiovascular disease. Boron deficiency signs may be related to the level of vitamin D and possibly other nutrients in the diet. Deficiency Symptoms: Osteoporosis, Arthritis.*,**

Iodine is unevenly distributed in the environment. In large areas, often mountainous, environmental levels are inadequate for humans and animals. Iodine is especially important for the thyroid gland which regulates the body’s production of energy and metabolic rate, and is involved in the conversion of carotene to vitamin A, in protein synthesis and in synthesis of cholesterol, which is the building block for hormones. Deficiency of iodine can result in goitre (enlarged thyroid) and hypothyroidism (which in turn leads to weight gain, dry skin and hair, sensitivity to cold, sluggish metabolism, slowed mental reactions and hardening of the arteries). Deficiency has also been linked to breast lumps..*,**

Magnesium is important to calcium and potassium homeostasis. Numerous biochemical and physiological processes require or are modulated by magnesium, including energy production, protein synthesis, muscle contractions and vascular tone. Extracellular magnesium concentrations are critical to the maintenance of electrical potentials of nerve and muscle membranes and for transmission of impulses across neuromuscular junctions. Magnesium deficiency is common since this mineral is refined out out of many foods during processing. Deficiencies have been associated with coronary heart disease, formation of clots in the heart and brain, calcium deposits in kidneys, blood vessels and heart, digestive disorders, depression and many other symptoms..*,**

Silver Humans have used and valued silver as far back as 3000 B.C. Continuing on in Greek, Roman, Indian, and Asian cultures as a precious metal, its historical occurrence is prominent (1). Initially valued for its luster, durability and malleability, its other properties soon gave rise to many more uses. The most utile of these is its antibiotic properties coupled with its relative inert effect on human beings. The first medical uses of silver were recorded in 980 AD when a Roman man named Avicenna used silver filings as a blood purifier, for offensive breath, and for palpitations of the heart (2). Soon its medical efficacy as an antibiotic was recognized and used in all manner of silverware, utensils, and coinage to prevent sickness and disease. Its known use as an antibiotic continued on with mariners and westerners in the early expansion of the U.S. who would use silver coins to purify and prolong the life of various liquids(3). In the modern era, however, its uses in public health were temporarily lost with the advent of organic antibiotics. Only in the past couple decades has silver reemerged as the powerful antibiotic as it was long known to be.+,**

Zinc is found in all tissues. Its functions include enhancing the immune system, specifically the functions of the thymus gland and the spleen; involvement in the Krebs cycle and energy production; maintenance of healthy skin and taste buds; a component of insulin; a constituent of more than 2000 enzymes involved in digestion and metabolism including those for breakdown of alcohol, bone metabolism, protein digestion and phosphorus metabolism. Zinc can prevent toxemia. and protects against birth defects. Signs of dietary zinc deficiency include susceptibility to infections, stress and fatigue, loss of appetite, growth retardation (including dwarfism), delayed sexual maturity, skin changes including acne and stretch marks, prostate disorders and immunological abnormalities.*,**

** This statement has not been evaluated by the Food and Drug Administration.  This product is not intended to diagnose, treat, cure or prevent any disease.

What sets us apart